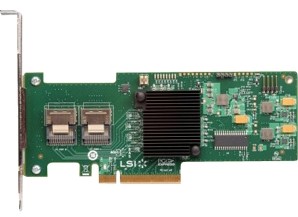 One of the most popular SAS 6.0gbps/ SATA III controllers for enthusiasts is the IBM M1015. In its native form, it is a very capable host bus adapter (HBA) based on the LSI SAS2008 chip. With the low price on places such as ebay (see here for an ebay search for the M1015) and an enthusiastic community that has learned to unlock many features, it has quickly become a go-to choice for low-cost SATA III connectivity. This series of articles was written by Pieter Schaar perhaps best known as the one behind laptopvideo2go.com. He has been a regular contributor in the STH forums and has been detailing his learning in threads such as these. I do want to note that these modifications are not endorsed by this site, LSI, IBM or others and the information herein is purely for educational purposes. If you do encounter problems, you are solely responsible for those consequences.

In the previous 3 articles I’ve discussed the ins and outs of what the IBM M1015 is capable of in various modes. Now if you were to proceed and purchase an IBM M1015 and wanted to use it in other than it’s default LSI9240/9220 mode you will need to crossflash the card to a LSI9211 HBA 6.0gbps SAS / SATA III adaptor.

LSI9211-IR = Pass through as in IT mode, but you also have RAID options (RAID 0, RAID 1, RAID 1e and RAID 10), better for RAID 0 Windows boot SSDs etc, and possibly run Software RAID 5 on the other drives.

LSI9240 = default mode, only really useful feature this mode has is RAID1/ RAID 10, drives have to be set to JBOD (single) or RAID to be seen by OS, can be annoying when adding removing drives often.

How to cross flash

First things first, we take no responsibility for anything going wrong.

Make a bootable USB stick, needs to be DOS bootable for the flasher etc to work, there are number ways to do it, ask Google

Self Extract the files somewhere, then place onto the USB stick

Turn machine off grab the SAS address of the card, it’s on the back on a green sticker (ie 500605B0xxxxxxxx)

Turn machine on (with card back in) choose USB stick at boot option, for all the below it is assumed you are booted to USB stick in the directory with the files from download.

Of possible use to ZFS fanatics, when flashing the card to IT mode, do not flash the mptsas2.rom, this then will not load the boot BIOS

Any SAS or SATA IIIdrives added will just passthrough as normal, as there is nothing to see or do in the BIOS in IT mode, you may as well not load it. This makes boot and reboot time faster as it doesn’t have to load the BIOS and wait for a key press. BUT you will need it if you are booting from one of the drives attached to the IBM M1015. You will also need it if you are running IR mode to access to the BIOS to setup RAID functions. This might be of use to some users.

I will probably run my 4x SSDs in LSI9211-IR mode to have the best of both worlds. It has great performance with RAID 0 and my 4x SATA III SSD’s and add other drives at will. Any drive added just shows to the OS no need to make it a Virtual Drive or JBOD first. ZFS folk seem to be very happy with LSI9211-IT mode with no RAID functionality at all on the IBM ServeRAID M1015. SMART passes through in either mode but NOT with RAID of course. Overall the IBM M1015 is a great card, now will the IBM M5015 be just as satisfying it’s next on the block…